In October, Richard and Chris decided they wanted to spend Thanksgiving with a couple old people from Indiana. They sent us plane tickets with instructions we were to come up with an itinerary for a fabulous adventure in New York City. How can you say no to an exploration opportunity like the one they were offering? I’ve already mentioned in a previous blog that I’m not a good flyer. Few hens like the idea of flight because we tend to drop like boulders from the sky. Who would have thought the most significant challenge on this trip would have been worrying if I would be able to get on the airplane?

We woke up on Wednesday morning to high winds in the 60 miles per hour range. Rooster and I took the day off from work to finish packing.  We were scheduled to fly out of Indy early Thursday morning, which was Thanksgiving Day. The plan was to make it to the hotel on the south side of Indianapolis before rush hour holiday traffic became a bumper-to-bumper nightmare.  We always book a room at a hotel the night before that provides a shuttle service to the airport. We’ve discovered the hotels that provide this service will allow you to leave your car parked there for up to a month at no charge. It also helps you to be rested and ready to fly if you don’t have to travel a great distance to get to the airport. An additional advantage to this arrangement is you don’t have to pay the high fee for leaving your vehicle parked at the airport. Things were moving along just as we planned until the power went out at our house. The high winds caused a pole to fall, snapping the power lines. We weren’t sure about what to do next, so we decided to go out to Choo Choo Mcgoo’s for breakfast. We saw the snapped power line and the crew from the power company on the way to the restaurant. 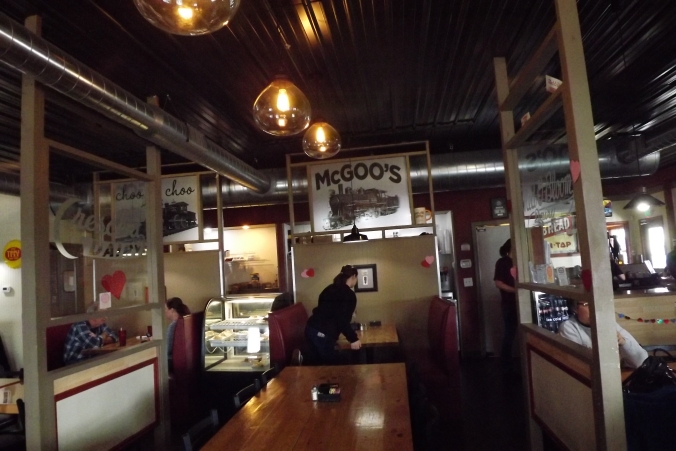 The power still wasn’t on by midafternoon. We received a text from the power company stating our electricity would be restored by eight o’clock in the evening. The temperature was dropping just below freezing, but Rooster and I decided not to wait around. The plan was for our son-in-law to check the house for frozen pipes. The water was running at a slow drip. There was still a little concern the house would get cold enough even with using the precaution. We loaded our luggage into the Sunshine Mobile and headed for the hotel on the south side of Indianapolis, where we had reserved a room. Traffic was still light when we hopped on the Interstate. We pulled into the hotel parking lot an hour before check-in time. The desk allowed us to have our room early even though we offered to come back later. When the woman at the front desk ran our credit card, the machine declined it. We had to use the second card we keep for emergencies. Rooster called the bank as soon as we were in the room. There was no way we wanted to travel all the way to New York City with a credit card issue hanging over our heads. The person on the phone informed us the card was rejected because the wrong expiration date was entered at the point of sale. This took a load off our minds.

It was too early to eat dinner, so we decided to visit a local coffee shop. We still are searching for unique places to spend a couple hours writing. We couldn’t find anything unusual when we did a search on our phone. We settled with the idea of visiting a chain coffee shop I won’t name because I don’t want to encourage this sort of behavior. When I opened the passenger side door of the Sunshine Mobile, a gust of wind blew the parking permit, which would allow us to remain parked at the motel while we were gone blew out of the vehicle and was tossed into the air. We were lucky it landed in the drainage ditch instead of the busy road in front of us. Rooster and I both went into the ditch to catch the wayward permit. We are old people. It was a comical sight for anyone passing by the drainage ditch to watch us climb in and out of the large hole beside the road.

We hung out drinking coffee until it was time to eat dinner. We enjoyed a lovely meal before we went back to our room and settled in for the night. We were ready to shower and relax for the evening. Rooster got a text from the electric company. It stated power wouldn’t be restored until two in the morning. We thought nothing else could go wrong, but we were so very wrong.

I decided to shower before I went to bed. It would save time in the morning. I noticed the hotel replaced the small sample sized plastic containers of shampoo, conditioner, and body wash with large refillable bottles in a metal holder. It appeared to be a brilliant idea because it would save the hotel money, create less waste, and be good for the environment. I removed my glasses before I climbed into the shower. I should have inspected the metal device holding the products before I took off my glasses. If I suspected the contraption wasn’t attached to the wall, I never would have attempted to use the blasted thing. I squirted some shampoo into my hands, created a good lather, and rinsed my hair without incident. It was when I attempted to shoot a little hair conditioner into my palm that I encountered the problem. The metal holder fell on to my foot, cutting a deep gash, which was about an inch long, bleeding profusely, and deep into the skin. 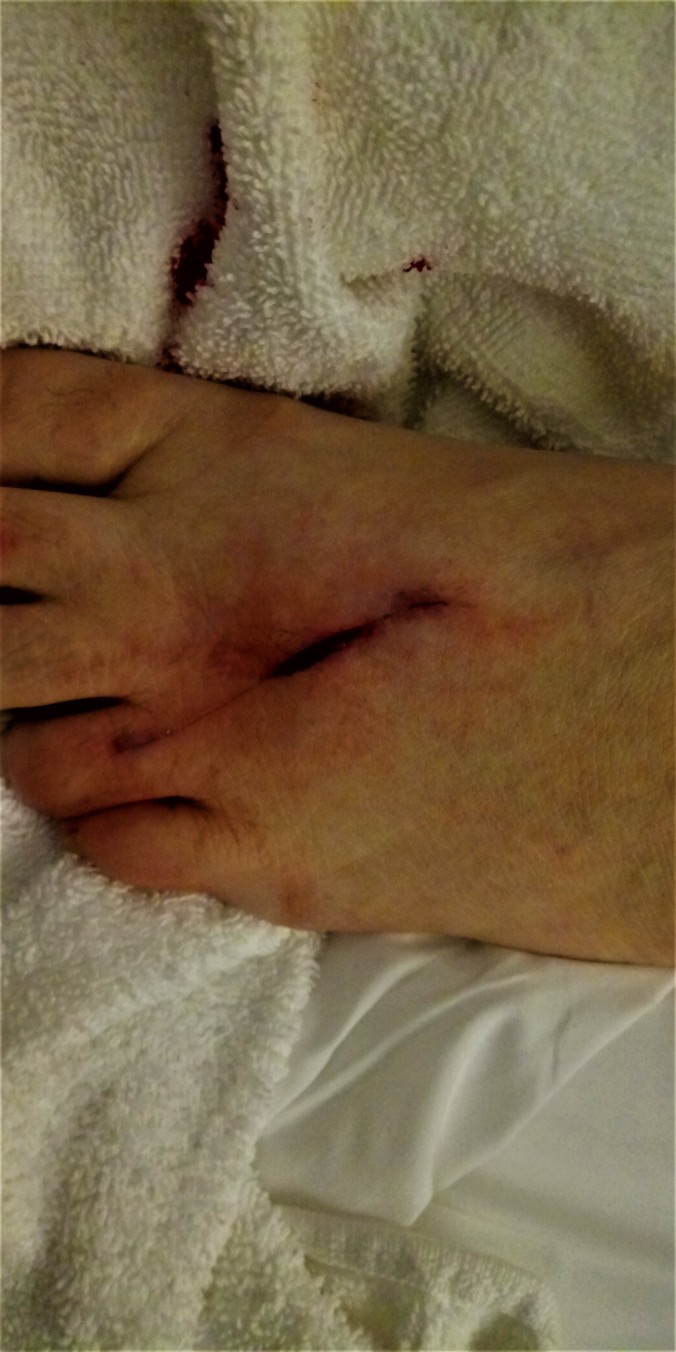 I decided not to mention the name of the hotel chain in this blog. We have stayed with them before and have always had a pleasant experience in the past. I do want to warn my fellow travelers if you encounter one of these dispensers for shampoo, conditioner, and body wash, make sure they are attached to the wall before you shower or bathe. I also believe hotel staff should be trained to offer suggestions for where one of their guests can receive medical treatment if an accident does occur. It was late in the evening the night before Thanksgiving. Rooster and I had no idea where to go for help. The staff gave us a couple of band-aids, but beyond that offered no suggestions. 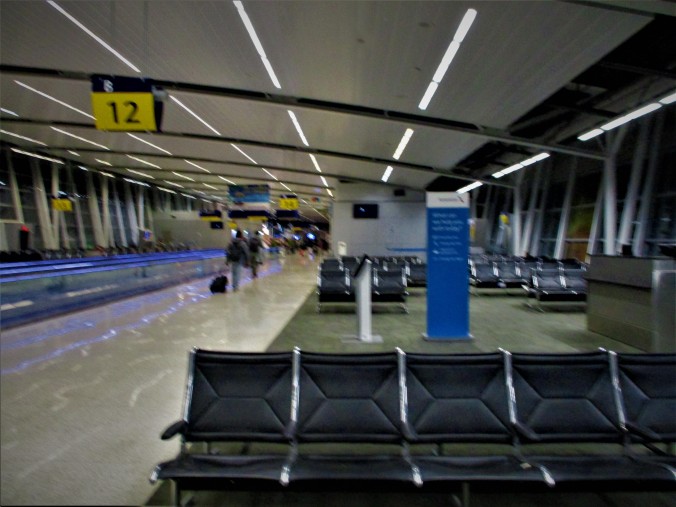 We were stuck with a dilemma. It was apparent we needed to get the bleeding stopped before I went to the airport the next day. Our flight would be leaving early in the morning. There wouldn’t be any time for me to see a doctor before I would be required to remove my shoes to pass through security. I wasn’t confident they wouldn’t allow me to board the plane if I was bleeding profusely. We’d talked on the phone with Richard and Chris. There was an emergency medical treatment center around the corner from their apartment. I could go there once I landed at LaGuardia if I needed stitches or got an infection. Rooster made a trip to the pharmacy. He bought some antibiotic cream and some butterfly band-aide stitches. We pressed my wound together, applied the antibiotic cream, and put on the band-aide sutures. To our amazement, our plan worked. After a restless night, I discovered the bleeding had stopped. I squeezed my foot into my shoe. We took the shuttle to the airport. I prayed the entire way my foot wouldn’t start bleeding again. I made it through security without a problem.

The wind from yesterday caught up with us when we descended to land in New York City. The pilot warned us beforehand we would experience a lot of turbulence. The landing was rough, but our pilot handled it with skill. The wind at our back cut twenty minutes off our flight time. We touched down at La Guardia early. The trip was filled with many trials and tribulations, but we managed to get to New York City in one piece even if I was a little wounded. Some of Rooster and my best adventures have started out rough. The trick is to push past the obstacles until you get to the smooth sailing. We settled in for the wait at the airport. Richard and Chris were coming to take us to the parade. Life is good when it’s filled with balloons and marching bands. I was determined to witness Santa Clause come to town riding in the Macy’s Thanksgiving Day Parade, even if I had to get there on a limp and a prayer.

This site uses Akismet to reduce spam. Learn how your comment data is processed.

Posts from the past