The next jewel we discovered wasn’t on Rooster’s list of coming attractions. We stumbled across the Bushwick Market during our stroll down Wyckoff Avenue. We were busy gazing at the street art painted on the side of the buildings. The first thing to grab our attention was a grouping of mirrors hanging on a fence surrounding what looked like a flea market. We stopped our rambling to snap pictures of our reflections in the round frames. We first split our party into two groups. Richard and Chris standing in front of one mirror, Rooster and I posing in front of the other. We looked like sailors looking out to sea through the portal of a ship. For our next shot, we all crowded together and held up our phones to snap the picture. Everyone went along with the plan except for Richard. He felt the need to question the relevancy of our group activity. He has never been one to go along with the crowd or do what everybody else is doing s9imply because they suggested he should. I hate to admit this, but he gets that tendency from me. I stay away from doing stuff to blend in with everyone else. People think I’m standoffish, but that’s not the reason I choose not to jump through hoops. I don’t feel comfortable doing something without reason, or the same way everyone else is doing it. I guess you could say both Richard and I are rebels without a cause, but now I have rambled off-topic. 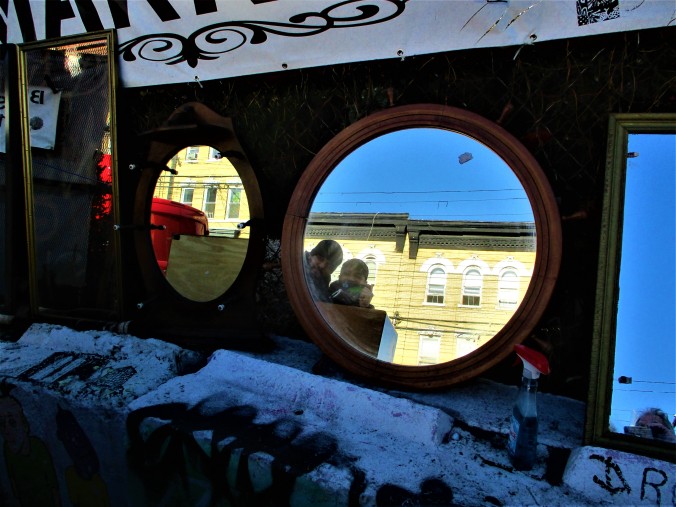 When we walked through the opening in the fence, I could tell we had entered a flea market where independent vendors had their own booth space. We have a lot of these back home in Indiana, but most of them close for the winter. The typical items you’d find in one of these places, such as antique furniture, unusual tchotchkes, antique knick-knacks, vintage clothing and jewelry, and antique furniture, were waiting to have a new owner purchase them. The big difference was the artwork scattered throughout the enclosed area in this open-air bazaar. The Bushwick Market is located in the middle of the most fantastic street art I have ever experienced. The creativity spills into the middle of this fenced area like water flowing from a spout. Among the antiques and the clutter, you can find artwork strategically placed. Graffiti art hangs on the fence at the back of the open-air market. I realized as I meandered around what appeared to be junk, but there was a method to the madness. The Bushwick Market was a living piece of art, which changed whenever someone bought a piece of the work in progress and carried it away.

When I looked at The Bushwick Market Facebook page, I discovered they also offer graffiti art instruction. It is also the home of the Heavy Freight graffiti gallery. Street art and graffiti have now become mainstream. What used to be considered a criminal offense has now become an accepted form of American folk art, like quilting and woodcarving. Innovation always moves from the bottom of the economic ladder to the top. It is where inspiration is born out of necessity. This truth exists in all artistic mediums. If there is going to be a catalyst to create change; it will always come from the streets, not the classroom. The blues and New Orleans jazz are a perfect example of this in music. Mark Twain didn’t attend an ivy league school. He cut his writing chops, piloting a steamboat down the Mississippi River. These ideas and bursts of creativity are born out of a desire for self-expression beyond the struggle for survival. If you want to see genuine expressions of creativity, always look to the hood for inspiration.

We didn’t ramble through the Bushwick Market long before an antique camera caught Rooster’s attention. He tried to do a little wheeling and dealing, but he couldn’t get Marianne to drop her price down below seventy-five dollars. He handed over the money and puffed his chest out with pride, He had a new acquisition. (There was a tense moment at LaGuardia Airport when he attempted to get the odd-looking object through security. They asked Rooster to move to the side. Due to a suspicious object, airport security searched his bag. The x-ray machine picked up the flattened camera. The man working security almost laughed when he pulled the piece into the light and saw what created the concern. The camera folded up into a thin black metal box, but the x-ray machine picked up the lens and other working parts. For a second, I thought we were on our way to jail or deportation. I believe New Yorkers consider Indiana to be a foreign country filled with annoying tourists.)  Rooster has proudly displayed the camera next to the batwing typewriter he found last year. 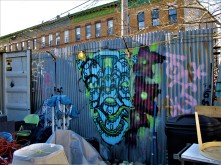 Hunger motivated us to leave the Bushwick Market behind. We meandered through the streets of Bushwick until we discovered a local Pizza parlor. Rooster and I have experienced the original Chicago deep-dish pizza, but we still hadn’t had a slice of what New York has to offer. The pepperoni we ate in Bushwick was incredibly tasteful, but Chicago still has New York beat. What we found interesting about the restaurant where we ate was even here there were works of art. The tabletops were a collogue of interesting items under thick glass. After we finished our meal, it was time for us to move on. Williamsburg was only a short walk away. We had a stop to make before we needed to hop a train ride back to Manhattan.

This site uses Akismet to reduce spam. Learn how your comment data is processed.

Posts from the past